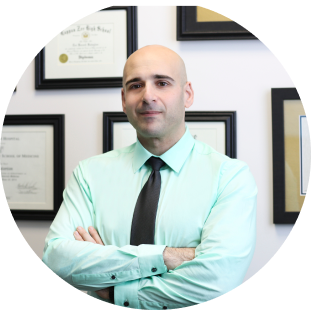 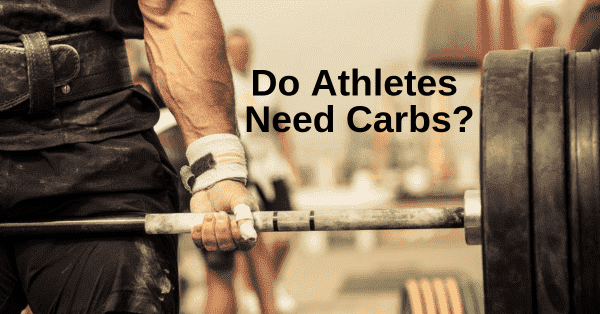 While many dietitians and nutritionists who keep up with the medical literature have become more accepting of low carb & ketogenic diets, many still hold on to their biases. Many dietitians, nutritionists and physicians are not aware that low carb and ketogenic diets are now an ADA recommended medical nutrition therapy for diabetes and high blood sugar, given the amount of scientific evidence supporting their use. So while evidence has grown supporting low carb diets, many healthcare providers have not kept up with the growing body of data. One of these areas where ignorance is still pervasive is the standard recommendation that “athletes need carbs.”

I respect & am happy for those who follow #keto & have lost weight. However, please don’t tell athletes they should do #keto.

In fact,if you don’t have formal nutrition education or training please don’t advise on nutrition.

We need to do better at swimming🏊‍♀️ in our own lanes.

Let’s examine the literature, and see if we should follow the advice of some low carb critics who say “don’t tell athletes to do keto.”

What did the study find? First, the athletes ate almost no carb 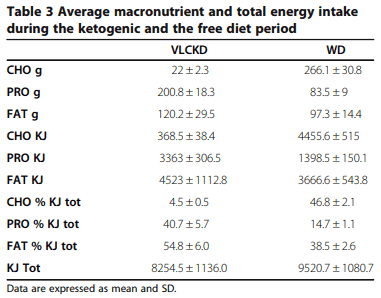 According to nutritional dogma, shouldn’t their performance suffer? Did that happen? Hint: No. 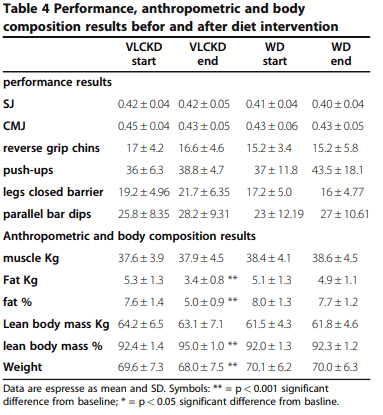 Not only did their performance remain unchanged, but their body composition improved, as they lost about 5 lbs of fat while maintaining their muscle mass. They were thriving!

Conclusion: It appears that elite gymnasts can disregard the nutritional dogma and consider low carb approaches.

In 2018, Daniel Green sought to determine if a ketogenic diet would impair strength performance in Olympic-level weightlifters who were looking to reduce weight (Study: link). He enrolled power-lifters in a randomized, 3-month, crossover intervention where lifters either ate a ketogenic diet or a usual diet. 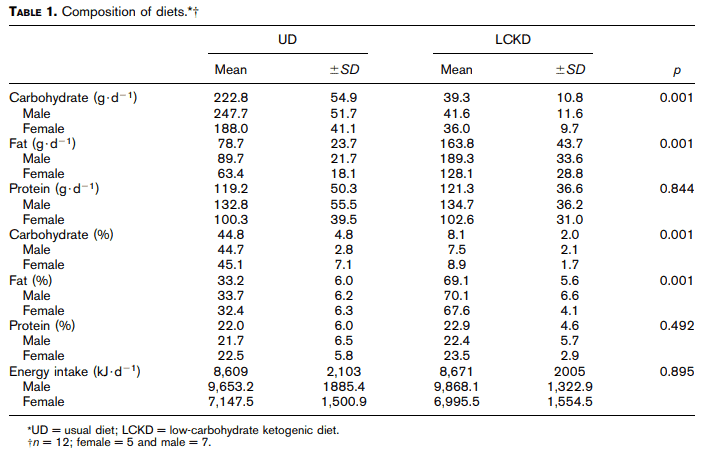 According to nutritional dogma, they should have been weak and tired and unable to maintain training volume and load. Did that happen? Hint: No.

And what about their performance and body composition? The lifters actually lost a significant amount of weight, and some lean mass, but their 1RM didn’t significantly change.

Basically the researchers found that their was essentially no overall change in performance but the power-to-weight ratio increased. They were thriving! 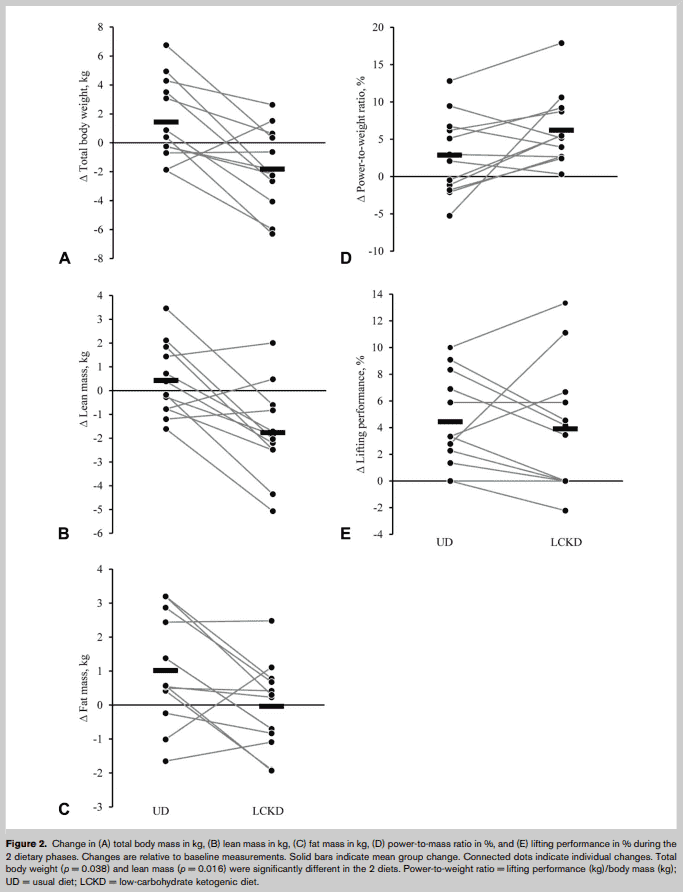 Conclusion: It appears that elite power-lifters can disregard the nutritional dogma and consider low carb approaches.

In 2017, Fionn McSwiney sought to determine of a ketogenic diet would affect the performance and body composition of endurance athletes (Study: link). The study enrolled 21, well-trained, endurance athletes who typically ate a high-carb diet. The athletes self-selected into a 3 month dietary intervention of either their usual diet or a low carbohydrate ketogenic diet. Body composition was measured before and after, as well as 100 km time trial, six second sprint, and a critical power test. This is what their diets looked like.

According to nutritional dogma, the very low carbohydrate group should experience significant decreases in performance. Did that happen? Hint: No. 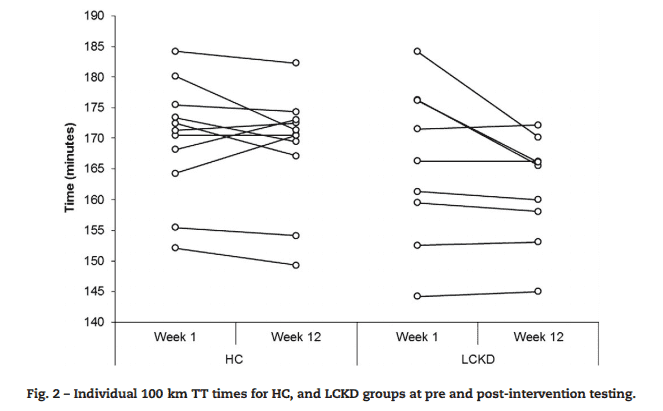 The researchers found that there were favorable improvements in body composition, improvements in peak power in the six second sprint testing and the critical power tests. The improvements in 100 km time trial for the low carb group were notable but not statistically significant at p=0.057. They were thriving!

In 2018, Paoli conducted a small pilot trial to determine the effects of a ketogenic diet in triathletes, which he presented in a poster at the annual meeting of ACSM (Study: link)

The study recruited 16 expert-level triathlon athletes and randomized them into a ketogenic diet or a typical western diet. Subjects were maximal oxygen consumption (V02max), as well as peak power output and other markers at 45% of PPO.

According to nutritional dogma, the very low carbohydrate group should experience significant decreases in performance. Did that happen? Hint: No. 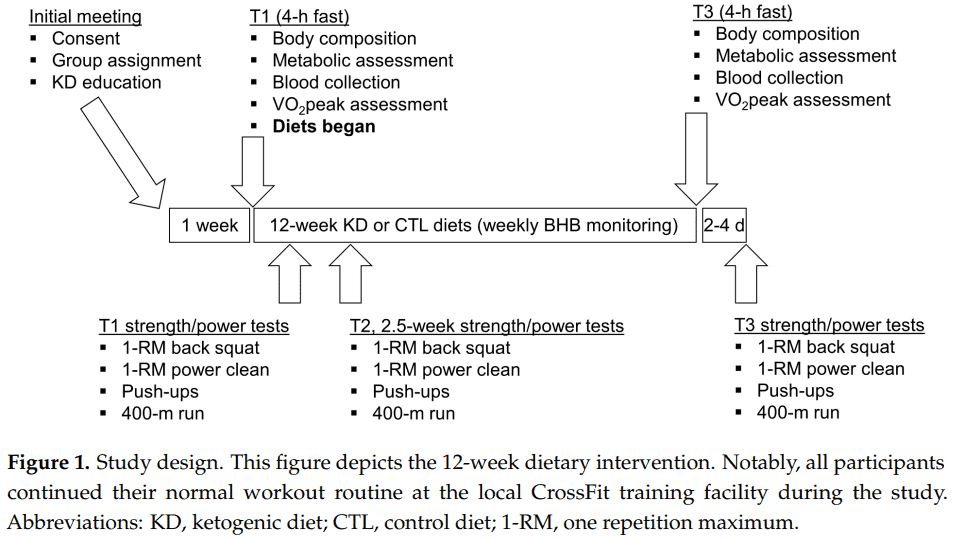 The study divided participants into two groups, a control group and a ketogenic diet group. The performance and body composition of the participants were assessed before the intervention, at 2.5 weeks and at 12 weeks. 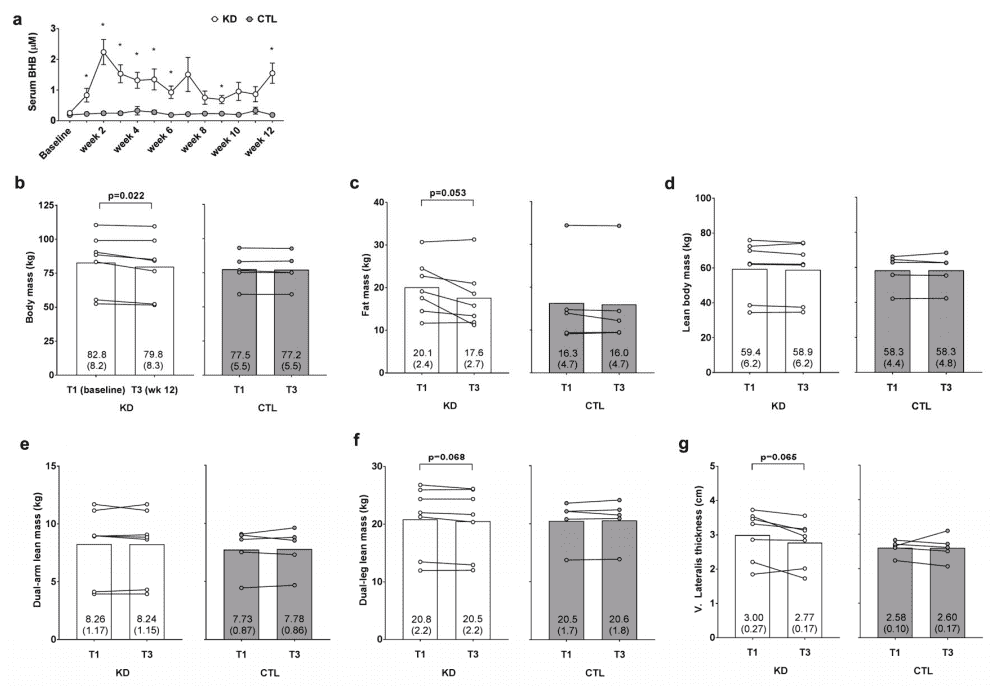 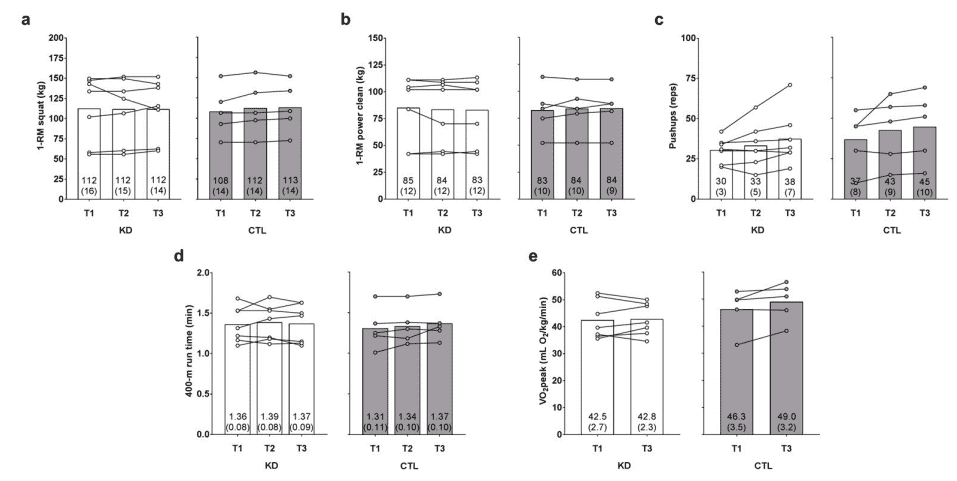 The study found that at the end of 12 weeks, participants in the ketogenic diet group experienced a decrease in fat mass without ANY compromise of weightlifting, running or aerobic performance metrics.

In 2018, Lukas Cipryan sought to determine the effects of a ketogenic diet on performance and physiological responses during High-Intensity Interval Training (HIIT) (Study: link)

The study randomized two groups into a usual diet or a ketogenic diet for a 4 week duration.

18 moderately trained male athletes were assigned to two groups and several parameters for body compositions, substrate utilization and performance were measured at baseline, 2 weeks and 4 weeks. 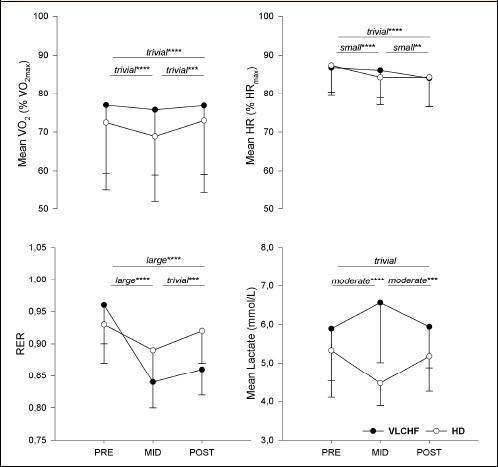 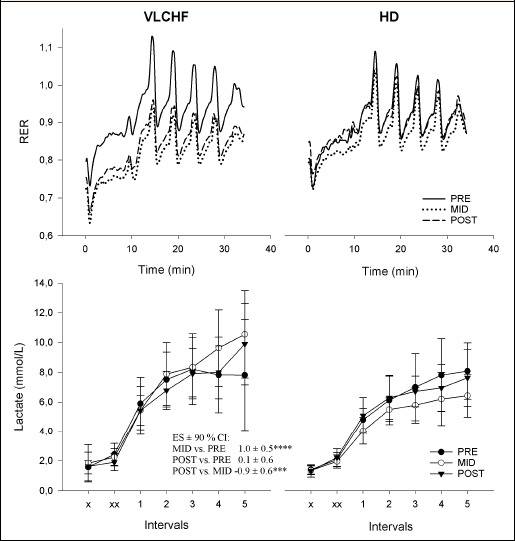 The study found that athletes on a ketogenic diet increased the athletes ability to utilize fat over time, without any adverse effects on total time to exhaustion or on the graded exercise tests. 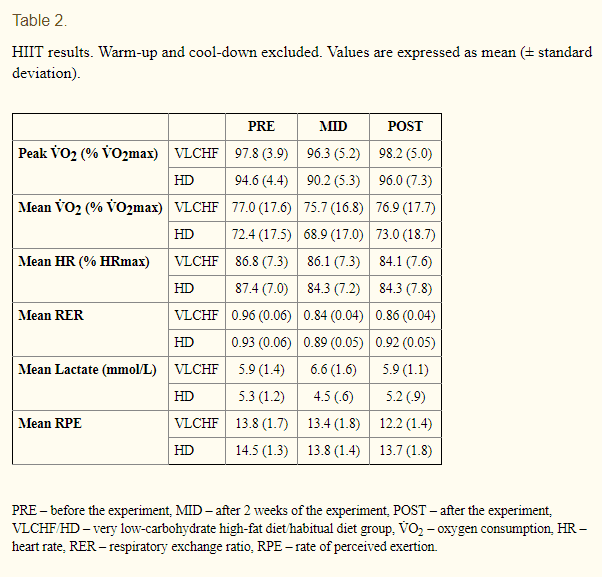 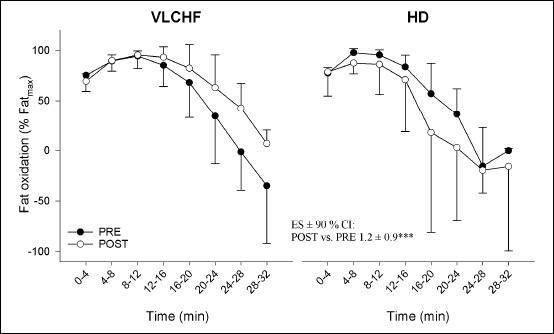 In addition to the lack of ANY compromise to performance, one of the most important findings from this study was that fat oxidation continues to increase even after 4 weeks. This leads to a very important point when understanding studies of low carbohydrate athletics. In the paper, the authors point out that there is a critical hole in sports nutrition with regards to ketogenic diets, especially with regards to “understanding the time needed to become accustomed and fully adapted to distinctly different habitual diets.” This adaption period seem to be more than 3-4 weeks.

Conclusion: It appears that trained athletes who use HIIT training can disregard nutritional dogma and consider low carb approaches.

Similarly in 2018, Emily Miele, studied athletes who were randomized to a ketogenic diet versus an unchanged control diet (Study: link).

The study recruited 15 recreational athletes, including both men and women. The study sought to determine the effects on performance of short-duration, high-intensity exercise, including timed 500m row, wingate anaerobic test, and a 3RM deadlift. Aerobic capacity was also assessed by measuring V02 peak.

The study found that a ketogenic diet did not affect the performance of short-duration high-intensity exercise.

Conclusion: It appears that trained athletes who use HIIT training can disregard nutritional dogma and consider low carb approaches.

What about long-term health implications?

Clearly given this evidence athletes should feel fine to utilize a low carbohydrate approach for body compositions without fear of compromising performance, especially if they allow for the 4-12 weeks it seems to take for fat-adaption. But we haven’t yet discussed the long-term health implications of continuing to advocate carbohydrate loading that is championed in sports nutrition circles. Is it necessarily healthy.

An interesting study from 2016, from Thomas Felicity sought to determine the glycemic excursions and patterns of sub-elite athletes using continuous glucose monitors (CGM) for 6 days each (Study: link).

Let’s take a closer look at the diet of the athletes from the study, you’ll notice that the athletes were eating predominately carbohydrates with a significant amount of added sugar. 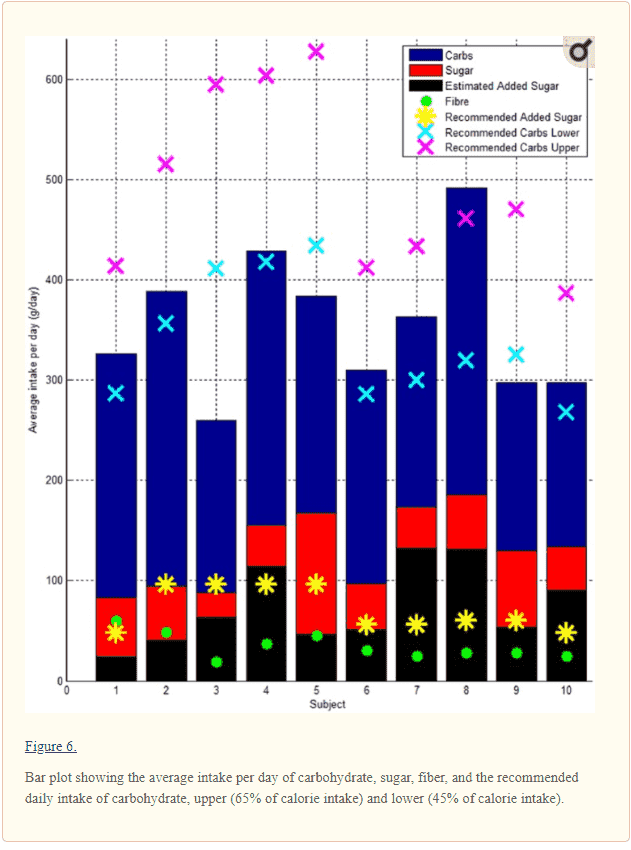 These sub-elite athletes were actually eating diets full of sugar and HFCS.  They were following the recommendations of the dogmatist who still recommend carb loading. And yet, not surprisingly these scientists present themselves as unbiased and evidence based. 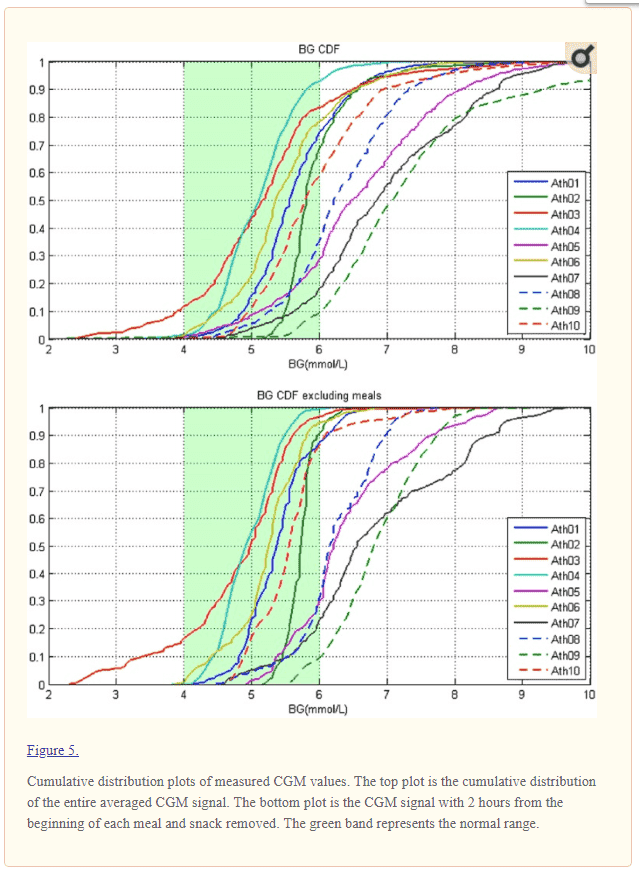 What exactly is the long-term impact of having blood sugars consistently so high? All of the diabetic data points to more micro-vascular complications with a higher blood glucose. How is that these athletes have such high glucose level when they are so lean and have such low body fat percentages? Its an interesting question particularly when the nutritional dogmatists would say that they are “burning off the calories.” Thankfully with real-time monitoring, in the clinical world, we see these high glucose levels drop immediately with the reduction of carbohydrate consumption, but the dogmatists are doubling down.

Time to examine the myth that High Fructose Corn Syrup is the equivalent of satan himself… newsflash: THERE IS NOTHING INHERENTLY EVIL ABOUT HIGH FRUCTOSE CORN SYRUP. But don’t take it from me. Get the truth in this research-backed Biolayne article! https://t.co/I2Ed9UYxhz

Many sports scientists and ivory-tower PhD’s contend that sugar, calorie for calorie is not different than any other nutrient, and that if there is a signal for improved performance that athletes should have no fear about its use. Along these lines, these scientists say that the benefit from low-carbohydrate approaches are modulated somehow only by weight loss and that only calories matter, not the type (see snowflake comments about HFCS above). Let’s examine that for a minute. I’d like to bring to your attention to studies that directly refute this claim.

A group led by Jean-Marc Schwarz in 2017 conducted an interesting study that look at the effects of fructose restriction on adolescent children with obesity(Study: link). Just as a reminder, the tweet posted above by the “scientist” who accepted gifts from Monster© was promoting fructose use, and in juxtaposition we are examining this study which implemented fructose restriction.

The researchers fed participants a diet with the exact macro-nutrient composition and total calories as their baseline diet, with the exception that starch was substituted for fructose.

According to nutritional dogma and the scientists who trumpet calories as the main mechanism and sugar consumption as safe, this intervention should have no difference in health outcomes. Hint: They are wrong again! 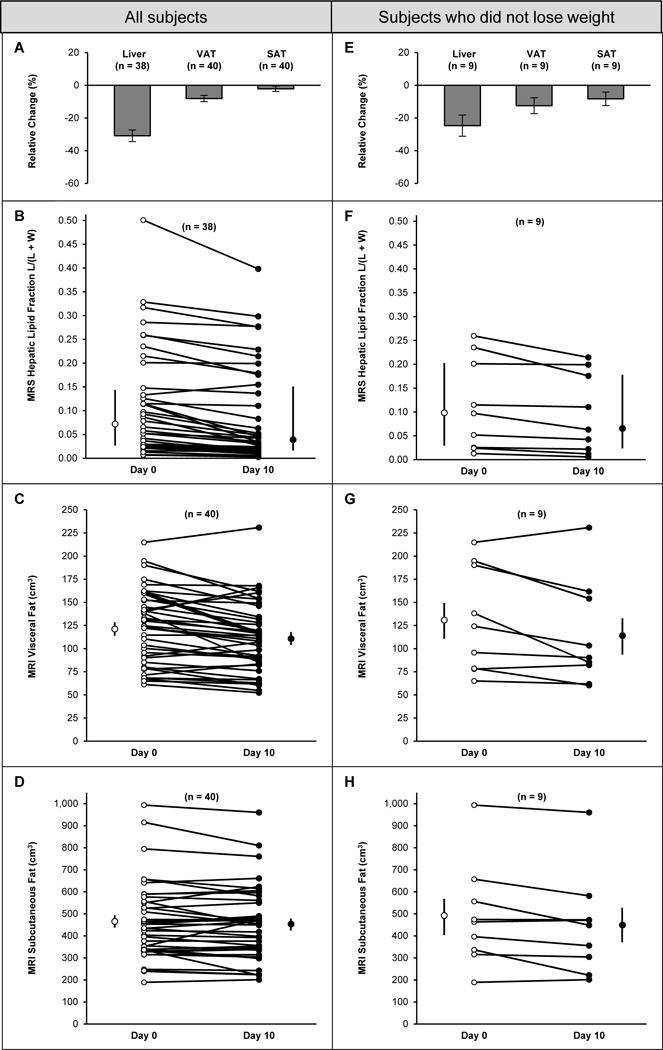 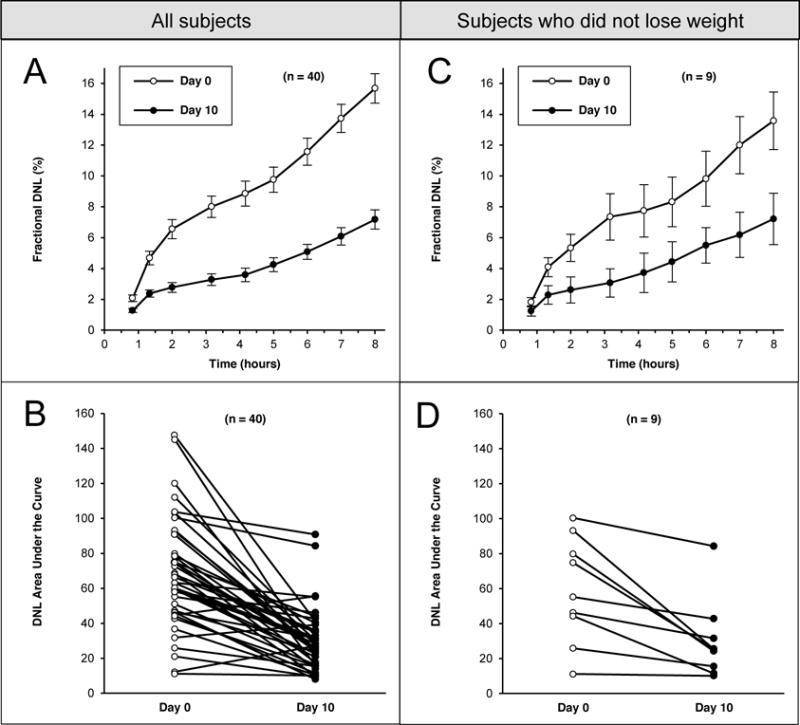 Conclusion: Sugar is uniquely harmful to the liver, the ivory-tower scientists continue to be wrong

Finally, I’d like to call your attention to another interesting study, which finally documents a process many of clinicians have seen for a long time. Clinicians have long noticed that the blood pressure, glycemia and lipids have improved in our patients who have adopted low carbohydrate diets BEFORE any appreciable weight loss. Still many critics have maintained that any benefit from low carbohydrate dieting comes solely from caloric restriction.

A conclusion of the 2014 meta-analysis I cited above: “Weight loss differences between individual diets were minimal.” Hard for me to understand why people continue to portray carb restriction as a silver bullet when we have data like these. Useful, yes; uniquely effective, no.

Again, we find that nutritional dogma is horribly wrong.

In this 2019 study, Hyde Parker and Jeff Volek sought to establish if a isocaloric low carbohydrate diet would have any appreciable effect on parameters of metabolic syndrome (Study: link). Below is a summary of the trial design. 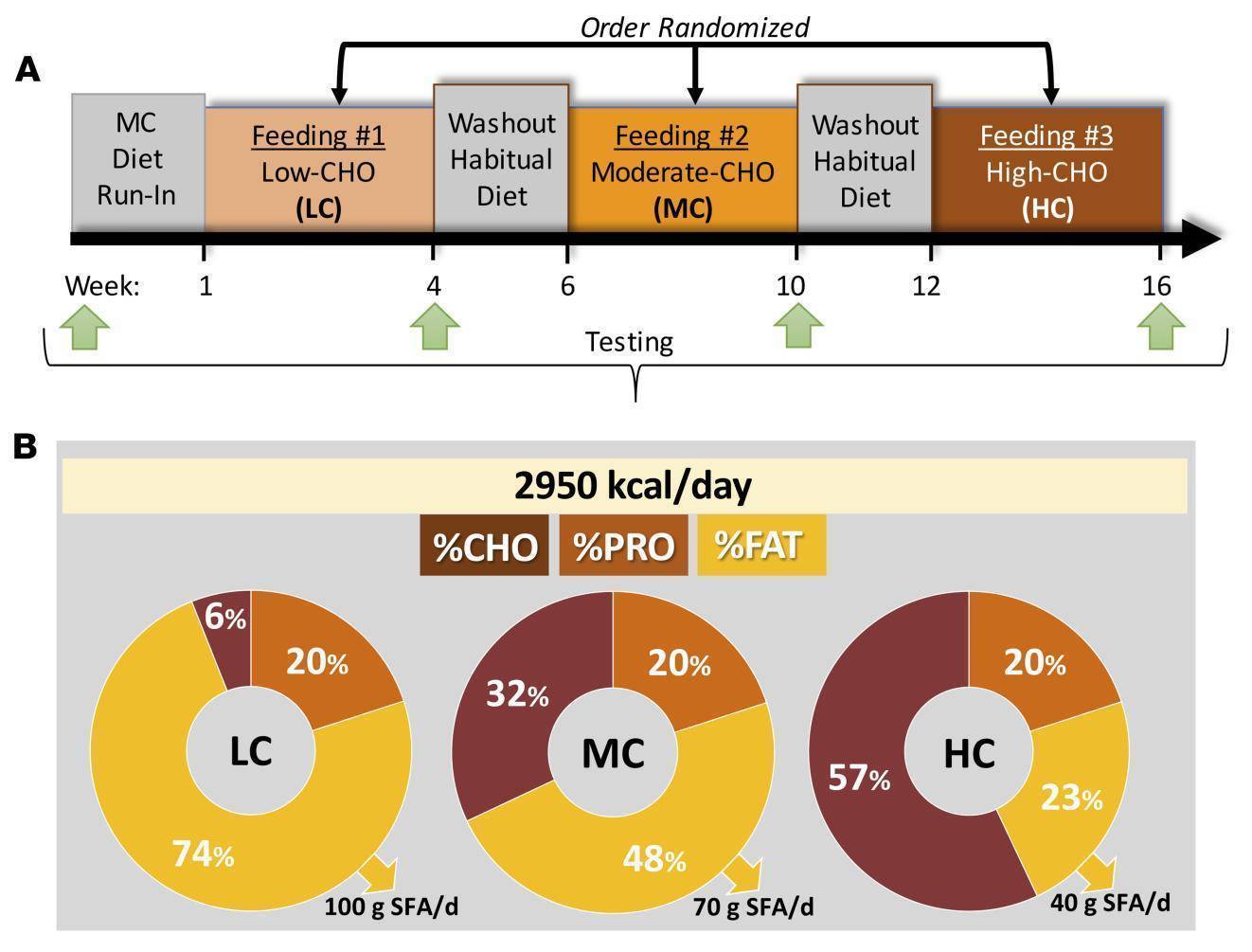 According to nutritional dogma, there should be no difference in outcomes. Per the scientist above, there is nothing inherently unique to low carbohydrate diets. Hint: they are wrong again. 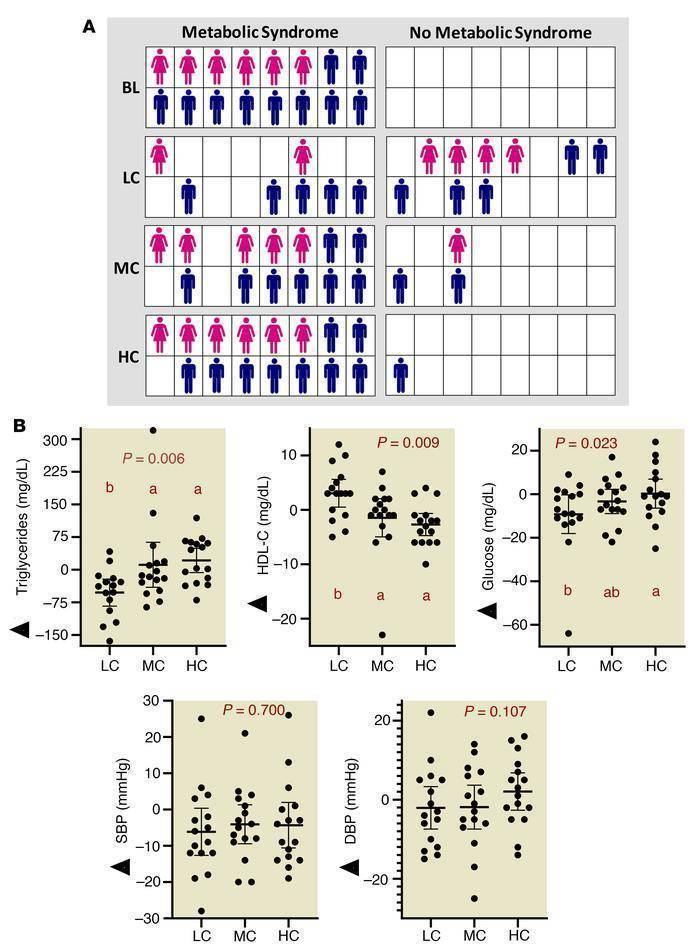 Conclusion: Carbohydrate restriction is uniquely beneficial, the ivory-tower scientists continue to be wrong

Let’s review some of the false narratives from supposed nutritional scientists and dogmatic dietitians. They claim that athletes should not consider keto or low carb approaches. They are wrong. They don’t take into account the potential long-term impact of diabetic and pre-diabetic range glucose levels in even lean, competitive athletes. They portend that sugar is not harmful when it is, and they also claim that low carbohydrate dieting is not unique or that it has no effect outside of weight loss. All of these are wrong. All of their assertions are negated by a proper review of the literature. 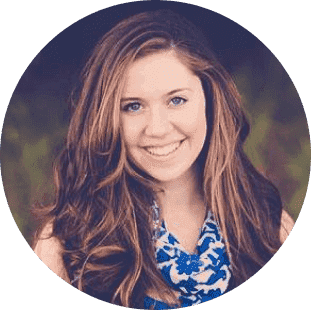 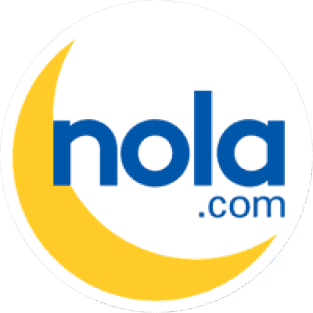 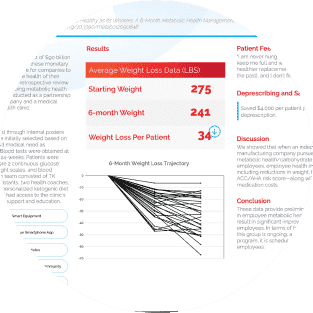