New Study: Outlining the Impact of Low-Carb Diets on Cholesterol 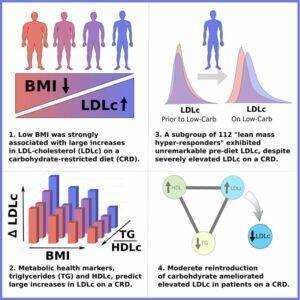 A new paper recently co-authored by Dr. Tro Kalayjian, DO, found that having lower BMI and a lower TG/HDL ratio was associated with larger increases in LDL when beginning a low-carbohydrate diet. The paper also included a case series highlighting that this phenomenon may be at least partially reversible. According to Dr. Tro, “This study is the tip of the iceberg. If we can predict who will experience increases in cholesterol from a low carb diet and modify their approach, this is potentially something really useful.”

Published November 30, 2021 in Current Developments in Nutrition, the journal of the American Society for Nutrition, the report is entitled “Elevated LDL-cholesterol with a carbohydrate-restricted diet: evidence for a ‘lean mass hyper-responder phenotype.” The report demonstrates findings from an online survey collected by Dave Feldman and a case series of patients from Dr. Tro’s clinic. The conclusion states that “in contrast to the typical pattern of dyslipidemia, greater LDLc elevation on a carbohydrate-restricted diet tends to occur in the context of low cardiometabolic risk,” but the paper also emphasizes that the findings are early-stage and not generalizable. The other authors include Dr. Nicholas Norwitz, Dr. Adrian Soto-Mota, Dave Feldman and Dr. David Ludwig.

The patients from the case-series had all presented to Dr. Tro’s clinic with a primary concern about an elevated cholesterol level after they had independently started a ketogenic diet. Dr. Tro’s team gathered all prior medical records on these patients and noticed that all of them had prior lipid levels that were relatively normal. Each of these patients agreed to further testing including genetic testing and imaging tests which demonstrated that these patients were otherwise healthy. Each of these patients either refused conventional treatment including statin therapy or they did not tolerate them previously.  Dr. Tro observed that the reintroduction of a modest amount of carbohydrates reduced their cholesterol substantially. One patient reduced cholesterol levels by over 480mg/dl, with the average reduction well over 100mg/dl.

The authors suggest that “patients with obesity and related disease may be at low risk of experiencing a clinically significant increase in cholesterol when adopting a low-carbohydrate diet, but that in contrast very lean, healthy, physically-active individuals may be uniquely susceptible to more dramatic increases.” Above all, the authors caution that more prospective and interventional studies are needed to confirm and explore these findings.

“This is some great early data that may be able to guide further research and potentially change clinical management of patients experiencing a high cholesterol level after starting a low carbohydrate diet,” said Dr. Tro. “I’d like to thank my co-authors, mentors, friends and family, but above all, I’d like to thank my patients for agreeing to share their data to the medical community.”