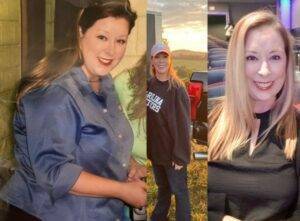 Where do you live? Charlotte, North Carolina

Profession: Was in dentistry 16 years and now have gone into commercial banking as of July 11th.

Diet/weight history: My entire life I considered myself fat, even at 150 pounds I considered myself heavy. My dad’s family are all morbidly obese. My grandmother weighed close to 400 pounds at one point in her life. My Dad was 6’5″ and over 300 pounds. Almost everyone had diabetes including my father. I was rewarded with food as a child. I can remember getting up in the middle of the night and gorging myself on Lance’s peanut butter crackers and Little Debbie oatmeal cream pies. However, looking back, I was not fat. My mind was fat.

I started Weight Watchers at some point, as my Mom thought it would be a good idea for me, since she was doing Weight Watchers. I started to gain a lot of weight after I got married. My heaviest weight was 262 pounds at one point. I did not have a happy marriage. I created my family of origin which wasn’t the healthiest. Our family put the “fun” in dysfunction. I am a survivor of sexual abuse. Around my 37th birthday, I was tired of hating myself and being extremely uncomfortable and sleeping all of the time. Maybe I was depressed? Maybe I was just extremely obese and couldn’t do anything but sleep. I decided to go on a vision quest for 7 days in the wilderness of North Carolina and decided to take control of my life. I joined a gym and asked my husband at the time to join the gym with me. I kept the gym and divorced my husband. He did not have the healthiest of eating or exercise habits. In fact, he worked for Nabisco. See where this is going?! I took back my health and lost over 100 pounds. I was the healthiest and happiest I had been. I started taking phentermine and was high all of the time.

My excess eating has always been tied into my emotional state and what was going on in my life. I am a food addict/ binge eater. I did not know this at the time, until I started realizing that I was ordering two and three plates of food, eating all of them, then hiding the takeout bags and plates and sneaking around. I lived alone. Doubt my cat or dog would care that I was doing this. And even after eating all of that food, I still wanted more. I would go to a fast food restaurant and say this is the last time I am going to do this, order 4 breakfast biscuits or double cheeseburgers. I would eat everything and feel sick and STILL want more food. I would find a place to throw everything out and deodorize my car. Again, I was somehow thinking I was fooling myself. Guess what tomorrow never came and I couldn’t stop eating. I could never get hold of my binge eating. I could be miserably sick and doubled over and STILL want to eat. You know the feeling, that stretched out stomach feeling. And the food never tasted that good!

Around 2010, I was told I had sufficient damage to my colon and should stop eating foods containing gluten. I always wondered why I did not have healthy bathroom habits. Never imagined that it was a gluten problem. I finally stopped eating gluten. My gut cleared up. However, my older brother died quite unexpectedly and suspiciously. My mother found him dead in his bedroom at her house. From 2017 until January of this year, I had been taking care of my mother. After my brother’s death, she went downhill and had dementia and a host of other medical issues. My binge eating and food addiction came back with a vengeance. What did I do? I would eat all kinds of food containing gluten and be sick all of the time. My ordering three and four plates of food and eating them all and sneaking food and eating it got worse and worse. I packed on 80 pounds fast! My mother was declining and it was up to me to get her house sold, tackle her affairs and take care of her daily needs. Food was my comfort and my solace. But it was also making me miserable. Sometimes I think that food was filling a hole in my heart that could never be filled as with dementia you lose your Mom bit by bit, little by little. Food was my strength and backbone in some pretty rough times. And it was something that I could control when I had lost my control in so many other situations in my life. Being sexually abused as a child I had no control, taking care of my Grandmother that lived with us as a child I had no control, taking care of my father when he was dying I had no control, at some points in my life taking care of my brother indirectly, and then the last hurrah, taking care of my mother. I am a care-taker, but that is over now. It is now time to take care of me.

In 2020, after the gyms opened from being shut down from covid, I went back to the gym with the intention of lifting and doing what I had done in the past. I had a free session with a trainer and did too much too soon. I developed a condition called rhabdomyolysis. I was in terrible pain and was in the hospital for about a week. Rhabdo is basically skeletal muscle death. The doctors told me to rest and hydrate to get better. I medicated with food. By 2021, I was sick of myself again. The weight was uncomfortable and I reached out again to a weight loss clinic. They sold me testosterone pellets and supplements and told me to eat three meals and 2 snacks per day and eat only 1200 calories. Guess what happened? I gained weight. I was trolling Dr. Tro’s page, and decided to contact the office and see what help he had to offer. I have since lost around 54 pounds.

Successes achieved on low carb? My binge eating has completely ceased, I have a clear mind, it has helped me deal with some pretty stressful
situations.

Why did I start low carb? I had trolled Dr. Tro’s page and saw the medical data behind the lifestyle.

How did I start low carb? I threw away all of the crap out of my house. Then bought recommended replacements.

How has keto changed for me over time? I don’t think about eating all of the time. I eat when I am hungry and not because it is a typical prescribed time. I have always had a problem thinking that food was scarce and I needed to eat. I don’t think that way now. I know I don’t have to eat if I am not hungry and that’s ok.

What do I struggle with? Now that my Mom is gone, cooking for one and relying on keto emergency foods.

What do I love about low carb? It’s a no brainer. Meat, veggies and boom you have a meal.

Top tip? This is a journey not a destination. Quit waiting for the next Monday, or next day or when you are skinny or when you get control. Consistency and knowing this is a lifestyle is key. And yes, one little bite can hurt you!

Advice for people just starting out? Self awareness is key. If you eat a food off plan, that isn’t going to break you. Give yourself some grace. Stop with the perfection. Realize low carb will fix your hunger. This is KEY! It’s a complete paradigm shift and unlearning a lot of conditioning.

Favorite inspirational quote?  Sweat is fat crying. Don’t dig your grave with your own knife and fork. Don’t trade what you want most for what you want at this moment.

Anything else you want us to know? There is strength in being vulnerable and reaching out for support.