Moderation is a Fairytale

At some point (likely many points) during your low-carb journey, you will encounter a tempting food that is off-plan, and something resembling the following will roll around in your brain:

“You can eat that — just have a few bites!! Go ahead! It’s fine! You’ve been so…good. You deserve a treat. You will get right back on track tomorrow.”

This is a lie. Your brain, in that moment, has been hijacked by a terrorist. And this terrorist is a LYING LIAR who will stop at nothing to get what it wants. And while you may be able to “hold it together” once or twice, there is no doubt that at some point just one bite will lead to a complete breakdown of any diet and health goals as that all-or-nothing mentality kicks in.

My whole life I was taug 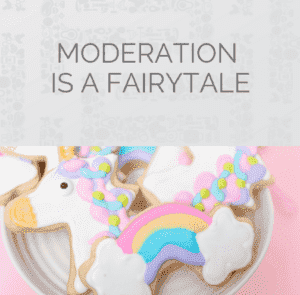 ht that moderation was the smart, sensible, sustainable way to lose weight. Even with all I know after losing 230 pounds with low carb, I still, still, have to fight these deeply ingrained messages. Over and over, I remind myself that moderation is a fairytale based on neither my vast prior experiences or actual facts, despite what our public health officials, food manufacturers and just about every doctor, nutritionist and magazine cover say.

Countless attempts to eat just one cookie, one serving of chips, one slice of pizza means that I literally dieted my way to over 400 pounds and was gaslighted into believing I was irrevocably broken for not being able to manage what I was told was the only path forward. And worse is that even knowing moderation is a lie does nothing to erase the stigma I carry from failing at it for all those years. That is a fact.

For me, for decades, there was no just one. There was all. Or there was none. And then all, again, in a never-ending cycle of binge-restrict-shame-rinse-repeat.

It wasn’t until I started a low-carb diet that I discovered a way out. How I eat now is a realistic and sustainable version of moderation: eating foods that don’t make me hungry or crave more and more, prioritizing foods that make me feel good — my version of intuitive eating.

Early days of this way of eating I avoided foods loaded with carbs because they were not on the “Keto-Allowed” list. Now, I avoid them because they make me feel crappy, and because I know what a slippery slope they are. There is no one of anything, but there is waking up after a days-long carb-fueled binge riding a blood sugar rollercoaster of insatiable hunger and intense cravings. And with it? An upset stomach, splitting headache, returned eczema, swollen joints and long-dormant depression beating down the doors in my brain, threatening to settle back in for good.

My brain has a dark passenger that chips away at my resolve, so I routinely check in with my body to tell me exactly how to navigate. In so many ways it is smarter than all of us. 🙂 For me, low carb is the path forward. I know this is true with every fiber of my being because my body is not a lying liar. My body knows.

Occasionally, out in the wild, I will encounter a real, honest to goodness unicorn — someone who can eat just a bite, half a cookie and leave the rest for a later time that never comes. These people do exist, but they are incredibly rare. Those that extol the merits of eating everything in moderation will point to these unicorns and say, “See! They can do it! Everyone can do it. Just try harder. Don’t be such a glutton. Just have a little bit!”

The people screaming this the loudest, yelling at you to eat “sensibly”? They were more than likely born genetically blessed, or developed some extreme coping mechanism to manage it — something I don’t possess. They have all bought into the fairytale and don’t see the matrix they’re unwittingly a part of, gaslighted, too, into believing we are the broken ones — that if we just had a little more willpower, we would be successful. If we just committed more, loved ourselves more, suffered more, centrally planned and MyFitness Pal-ed a little better we would reach the promised land and lose weight for good.

I desperately wished to be just like one of those unicorns, to be free from what kept me imprisoned for so long. But I’m not. Simple as that.

It took me years to realize that not being born with the genetic cards stacked in my favor for thinness does not mean I can’t be free or sustain weight loss. Freedom from obesity prison doesn’t mean I am unencumbered by struggles and challenges on the journey to good health and a fitter body. But it does mean I now approach them from a place of love and acceptance instead of the internal judgment and contempt that kept me shackled for so long.

Freedom is knowing that sometimes the crimes being committed are an inside job and having the patience to listen, but not respond. Freedom is paying attention to the terrorist in my head, knowing what has happened all the times I’ve followed their advice before — and then heading off in another direction when my body lets me know exactly what to do.

Freedom means being honest and asking why and how this time will end any differently. It means remembering without shame, all the times before when having “just a little bit” was a gigantic lie, sugar-coated in denial, and that moderation is just a fairytale flown in on the backs of rainbow-colored unicorns leaving a whole lot of self-loathing in its wake.