Rockland Obesity Doctor Tro Kalayjian to Speak at Screening of FAT: A Documentary

Rockland County weight loss doctor Tro Kalayjian will speak at an event designed for people interested in learning more about low-carb and ketogenic diets, and how they can conquer the cravings and hunger that challenge their efforts to lose weight.

The event, to be held Tuesday, September 17 at Texas Brazil in Palisades Center, will feature a screening of the hit film FAT: A Documentary, directed by Vinnie Tortorich. Attendees will enjoy an all-you-can-eat Brazilian barbecue meal. Also speaking at the event will be Antonio C. Martinez II, who will talk about his experiences as a health/food policy lawyer.

RESERVE YOUR SPOT TODAY: Leave your information at contact@doctortro.com.

FAT: A Documentary tells “…the far-fetched but completely true history of how our country became so unhealthy. In 1970, just over 1.5 million people had been diagnosed with diabetes in the United States. Now more than 30 million have diabetes. What’s even more alarming is that 100 million people, one in three, have diabetes or are pre-diabetic, and 40% of our population is obese. FAT traces a detailed history spanning 150 years to show how misinformation and outright lies have become ‘truth’…”

FAT: A Documentary was released on July 30, 2019, and quickly became the top-selling documentary on iTunes (Trailer link below). 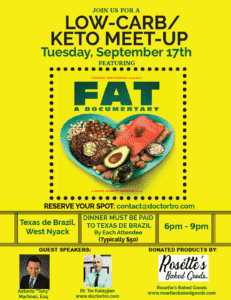 Those watching the screening will have the opportunity to hear Kalayjian present his views on weight loss and nutrition, with specific insights on topics such as low-carb, keto, and carnivore diets, as well as intermittent fasting, metabolic diseases, and more. Kalayjian—who is board-certified in internal medicine & obesity medicine—has an understanding of obesity and its challenges that most in the medical profession simply do not have.

Just three and a half years ago, Tro Kalayjian weighed 350 pounds, and his efforts to lose weight had consistently stalled. He followed the mainstream medical advice, which was to eat less and move more, but it didn’t work. This led him to go back and read more than 1,000 nutrition studies and papers, and more than 100 books about nutrition, including three textbooks.

Kalayjian’s research enabled him to sustainably lose more than 150 pounds, and he now uses that knowledge to help a fast-growing number of patients lose weight and reverse the symptoms of diabetes and other metabolic diseases. Kalayjian’s patients are being taken off insulin and other drugs—something Kalayjian never even considered a realistic possibility just a few years ago.

“I think it’s difficult for physicians who have not been overweight to relate to the struggles of somebody who is obese,” said Kalayjian. “I understand the challenges people face because I lived it every day.”

NOTES: Space is limited. Reserve your spot today: contact@doctortro.com.
There is no charge to watch the film. Attendees must pay for their meal at Texas de Brazil. A typical all you can eat meal with beverage is approximately $50.00 per person. Money-saving tip: You can buy Texas de Brazil gift cards at a discount at Costco.