“That Patient Was Me…” 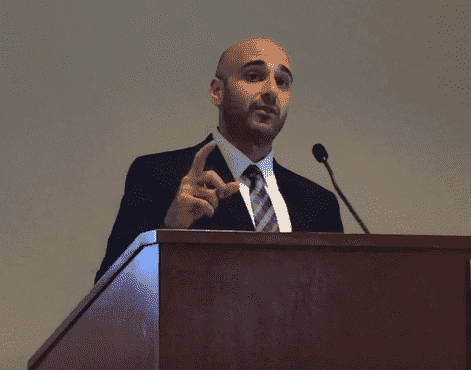 GREENWICH, CT — Dr. Tro Kalayjian stands at the podium in the Noble Conference Center at Greenwich Hospital. Nearly 50 doctors, nurses and other medical professionals, along with a few members of the general public who learned of his appearance on Twitter, have filled the room to capacity.

Kalayjian—a board-certified internal medicine & obesity medicine physician—helps obese people change almost everything they thought they knew about weight loss and nutrition. His unorthodox approach to weight loss has helped a fast-growing number of patients reverse the symptoms of diabetes and other metabolic diseases. His patients are also being taken off insulin and other drugs—something Kalayjian never even considered a realistic possibility just a few years ago.

Dressed in a tailored navy blue suit, the 190-pound Kalayjian projects an air of confidence as he prepares to begin a Grand Rounds presentation entitled “Questioning Dietary Dogma: A Clinical Approach to Dietary Advice”.

Early in the presentation, Kalayjian asks the audience to consider the case of a 32-year-old male patient with Class 3 obesity. The patient has pre-diabetes and extreme fatigue. He is a medical resident who works 80 hours per week, has two children, and his wife is pregnant with their third child. The patient has a family history of morbid obesity, diabetes, hypertension, and coronary artery disease (CAD).

Upon the advice of his primary care physician, the patient has seen a nutritionist who told him to eat six or seven small meals throughout the day, and to “eat everything in moderation.”

His PCP has also recommended he eat more fruits and whole grains, and more “plant-based products,” and has stressed the importance of exercise, while discussing other options like gastric bypass surgery.

“Despite being Class 3 obese, the patient was told to exercise more,” says Kalayjian, making no effort to hide his anger. “He’s tired, his joints hurt. Does that make sense? Is that the right advice?”

Kalayjian pauses, as if waiting for a response.

“Obesity is not a moral failure. Nobody wants to be obese. This patient doesn’t want to be obese. Patients like this are stigmatized, and they are forced to accept the situation because your advice is terrible,” he continues, looking out at the medical providers on the other side of the podium.

“Your advice stinks. The guidelines stink.”

As though he can no longer bear to think about the patient, Kalayjian shifts gears, and moves on to the subject of the obesity epidemic that has left more than two-thirds of US adults either overweight or obese, and more than one-third with metabolic syndrome.

“You may be thinking it’s a lack of willpower that explains the epidemic” Kalayjian ponders. “Did everyone, all of a sudden, lose their willpower in 1950?

“This is not an inability to control one’s self. It’s not laziness. There are obese people running marathons.”

Kalayjian’s intensity builds as he glares out at his audience.

The dubious weight loss and nutrition advice being dispensed throughout the medical community is what led Kalayjian to go back and read more than 1,000 nutrition studies and papers, and more than 100 books about nutrition, including three textbooks, in the past four years.

He believes most physicians practicing today do not have sufficient training in nutrition and are unable to help patients lose weight or reverse disease. Additionally, the food industry and special interests have made it difficult for people to understand what a healthy lifestyle really is.

“The standard advice was always ‘Eat less and move more,’ and that advice never worked, I went back to the medical textbooks and I started to look into the literature.

Kalayjian presents an additional 20 or so slides to his audience, many containing complex medical terminology. He explains what he has learned about obesity and nutrition since getting out of medical school, and the type of advice he’s been providing at the fast-growing medical weight loss and direct primary care clinic he opened earlier this year in Tappan, NY.

As he begins to wrap up his presentation, he pauses and asks “What about our 32-year old male patient with obesity?”

The last slide prominently features an image of an extremely overweight doctor in a white lab coat, with a stethoscope draped over his shoulder. The doctor’s features look vaguely familiar to the members of the audience…

“That patient was me,” Kalayjian says, as the audience members’ eyes disbelievingly dart back and forth between the screen and the athletic man standing to left of the podium.

“That patient was me…” 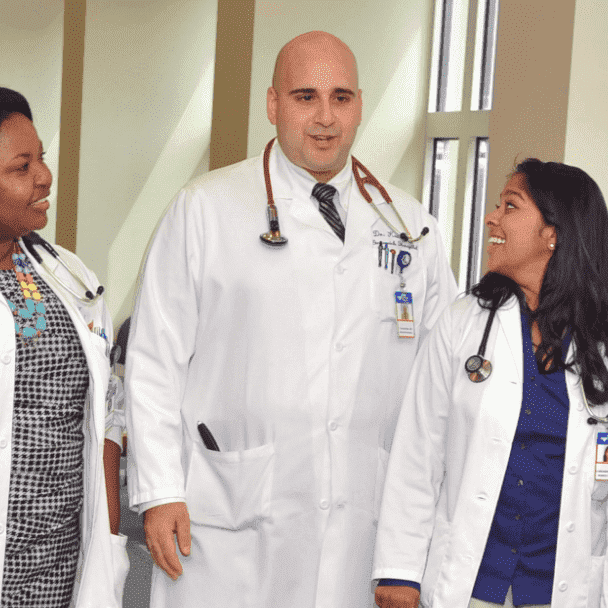